In conversation with Bunny Rogers, 06/13 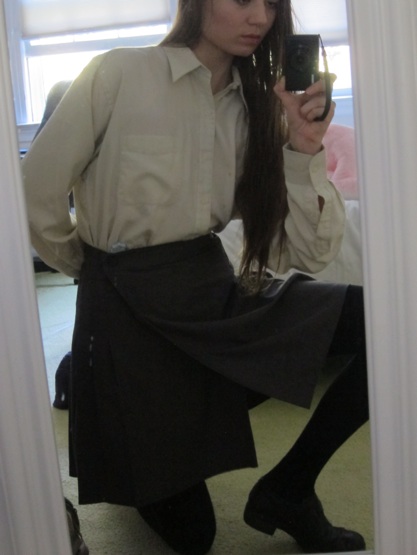 
My active years as a Neopets.com user (2000-2003) inspired a lot of creative writing and greatly influenced plotlines and characters. “Elsa’s Journey,” was my first published piece, appearing in Issue 25 of The Neopian Times. I was ten years old. Getting published made me feel closer to finding happiness. Subsequent submissions were regularly accepted. I felt satisfied by the content I was working with--veiled autobiography--and comfortable with my audience, which was largely anonymous, and kind. It seemed I was making progress in my dream to become a children’s book author and illustrator.


I expanded into self-publishing in 2002 via LiveJournal, which many of the members in my arts-focused guild also participated in. We opened accounts for ourselves and for our Neopets, with the intention of building an inclusive platform for role-playing and storytelling. Owner-designated journals frequently contained both in-character and [semi-protected] out-of-character entries. Observation of friends’ comfort with OOC posts encouraged me to write my own. This was appealing. My family had just made another major move, I was having the usual trouble adjusting, and I was lonely. I was excited by the prospect of a legitimate emotional outlet. Initial personal posts, which were relatively truthful recordings of my daily life (I continued to lie about my age, embellish, etc.) were well-received. However, this is when everything fell apart. The more I revealed of Bunny Rogers, the less stable my identity as Catnip4 became. Relationships with fellow Neopians grew quickly unmanageable; I was overwhelmed with embarrassment and shame. I deleted my LiveJournals, abandoned Neopets, and started life anew in Furcadia as Serineana the musteline. I stopped writing on my own almost completely.


In January 2012 Gene McHugh asked me if I wanted to participate in a casual artists’ reading. I agreed not having written much of anything in ten years. What I presented here was a batch of eighteen short collages of previously-posted Facebook status updates, notes to myself, and collected or stolen text. The spring and summer following when I struggled to produce artwork, making more of these “poems” was the only creative thing I could get myself to do. Launching Cunny poem in June was humiliating in a way similar to my LiveJournal, but it had to be done. I had nothing else. The response has been pacifying and I have not had a shortage in material. I am grateful. For me Cunny poem is a small step forward in finding the confidence to write again.


One of your poems is called “dead rose anticomedy”. This jumps out at me as quite evocative of your voice, and I’m wondering how much we can apply it as a stylistic term. What’s the role of comedy in your writing? Is it a device you use, or something you try and subvert?


My depression is my commitment to drama. Viewing life as theatre creates a detachment that allows me to process an otherwise crushing environment of extremes. What registers is oversaturated and deranged but demanding [deteriorating] in a way I have come accustomed to, I guess. The coexistence of comedy and tragedy in all things is a foundational idea for me and thematically appears in the poetry.


Maybe there’s also a more general subversion at work - a subversion of the absurd into the normal - in your poems. We can see this in the language - there’s these constant shifts, of the poetic into the banal, and back again. “u cant squueezw blood from a shoe” seems a good example of this; stones become shoes becomes drawing becomes beautiful becomes heartbreaking becomes fine i think, or at least ok, or maybe strength and betterment to carry on. Blood seems to be squeezed out of the word “squueezw” itself; whatever the reader expects is always being played with. Would you say there’s a sense of indeterminacy in your writing? That the meaning of things is sort of suspended until you make it. Is this an important way of thinking of poetry in general?

Maybe I can ask pose this question a better way. I think normal seems like a battle. Are you fighting any battles?


a) No, and not important to me, no. b) Chronic depression.


There’s a line in another interview you’ve done that I particularly like - “there has always been an audience in mind”. Who’s the audience in your poems? How present are they when you’re writing them, and how directly are they addressed?


I imagine my audience as perfect, comprised of one. Far away from me or dead.


Where do you usually write your poems?


I put the pieces together at home.


Is honesty a virtue for you? Does this come into your writing?


No, but accuracy is. I don’t think I am or can be honest.


I’ve been thinking about things like honour and chastity a lot actually, or maybe not chastity but virtue. Chastity becomes kind of a weird in our culture, and I don’t really subscribe to it in a literal sense, but there’s such a power in it as a term. Your cover photo on Facebook says “I will sooner die than betray my own thoughts”, and I think that’s part of what I’m trying to describe also. There seems like a distinctly non-modern fidelity within you/your work, which I find exciting. Can you talk more about this sense of virtue in your work, virtue which is encapsulated in a sentiment like ‘death or honour’? There is also a gender issue within this: honour killings still happen in the world and are often a tool of gender apartheid, whilst honour in its western history is reminiscent of a feudal value system, so constructed around gender difference and caste. How does this become embedded and challenged in your writing? Does honour have links to militancy?

I know you don’t specifically talk about honour - but maybe it’s the most useful word for me at the moment in trying to ask this question; if I think of one that’s better I’ll change it. “Im an artist / Im an angel / Kill for me / Die for me”.

I’ve been thinking about strength too.


To take anything I post or write at face value is oversimplifying and missing the point.


How important is hurt in your writing?


So far I’ve been looking at your cunny blog, I’m gradually going backwards through the pages as I write this interview. But you also have your collection of Shadow Usul poetry. What is this? How important is fantasy in your poetry? I like that you cross different worlds, highlighting their difference whilst making them seem almost the same thing.


“A collection of Shadow Usul poetry” is exactly that. I wrote the third poem down (authored as Catnip4), in 2001 probably. The Shadow Usul is my favorite Neopian villainess. I wanted to make an easy resource for other Shadow Usul fans.


What’s the presence of love in your work? Chris Kraus has said “every letter is a love letter”. Is the same true about poems?


I have liked to think of my poems as apologies. 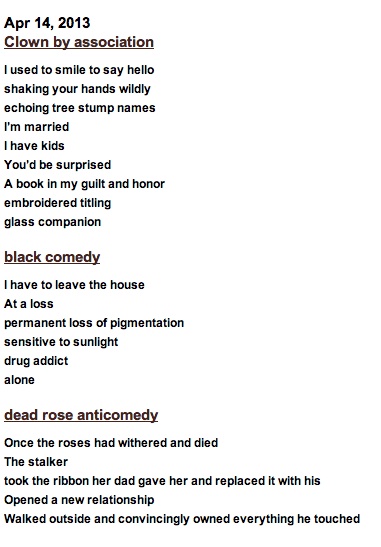 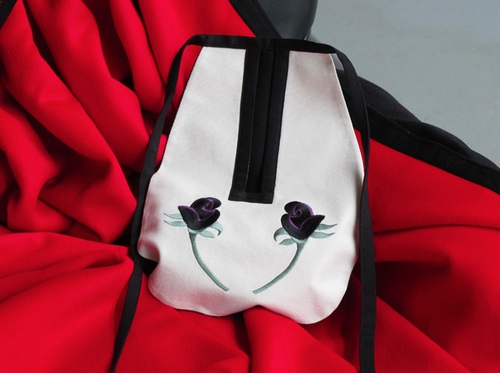